Heep Whitacre aka Patchie is a character from the later waves of the Horde gamemode, that has an unofficial Lore background explaining his presence in the Game mode.

The character and the lore background for him originated on the now archived forums, and then was later adopted by Triternion as a reference to the community creation.

During the 16th century, there was an old farmer named Heep Whitacre, better known as Mr. Whitacre by his acquaintances, who lived alone in his humble homestead a few miles off the coast of beautiful Cape Itherhew. He grew an assortment of vegetables- radishes and carrots mostly, and would often take a trip into town to sell his goods to his long-time friend Mr. Wheech, who would then happily resell them at his general store. Pratie Wheech they called him, because he loved potatoes so much that he'd eat 'em every day. One fateful day, rather than paying Heep for his perishables with money, he offered some seeds, instead. 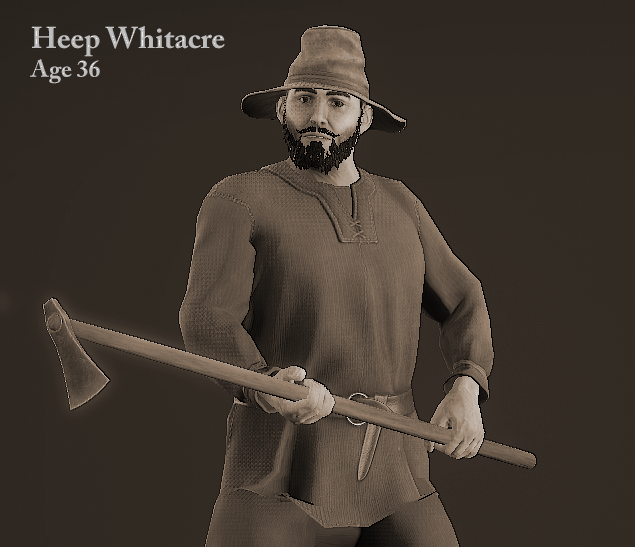 "Listen here Heep... I've got something you'll want to grow in your field! With these seeds you'll have quite a bountiful yield! No more carrots or radishes, not even potatoes! What I have here are the seeds of tomatoes! These tomatoes are red, plump, and juicy; the plant of kings! With the profits you'll earn you could buy so many things! For just one season's harvest you can have these spores- or perhaps you'd rather just take the gold, the choice is yours!"

Mr. Whitacre stroked his beard while listening to the salesman's intriguing offer. He quickly came to a decision, taking the seeds with a smile, and thought in his mind of all the wonderful ways he could spend the money he'd make. He planted the seeds, watered them well, and within no time at all his new tomato patch was coming along great. Sure enough, his tomatoes earned him a huge profit after the first harvest, and of course Pratie Wheech made his fair share from reselling them at his store. After a few more harvests, Heep made so much money he was able to hire workers to grow the crops for him. 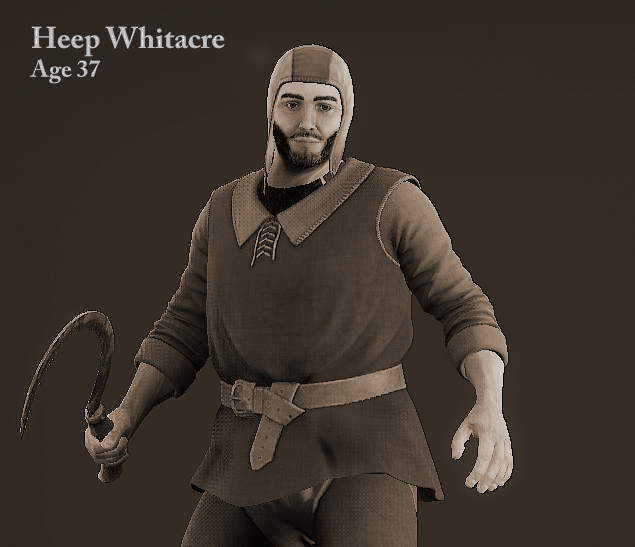 Many of the other farmers near Cape Itherhew tried to grow tomatoes of their own as well, but none succeeded, as there something was special about Heep's land: it was the only soil where the crops would grow. Heep eventually received a very generous offer by a rich real-estate baron by the name of Archie Thweep to buy his plot, enough gold to live like a nobleman for the rest of his life, but Mr. Whitacre refused to sell. Things we're going great for Heep, he even thought about finding a wife to start a family with. But it was the very next morning that Mr. Whitacre's luck suddenly changed, just as he was riding into town. His business partner Pratie, surrounded by tomatoes, looked at Heep with a frown and shook his head.

"I'm sorry Heep... but it looks like tomatoes aren't so hard to grow. Every farmer that rode into today had a full load of tomatoes, wouldn't you know! I'm afraid tomatoes aren't worth much anymore, and I can't afford to buy your crops. I'm sorry Heep, but maybe you could try your luck at one of the other shops?" 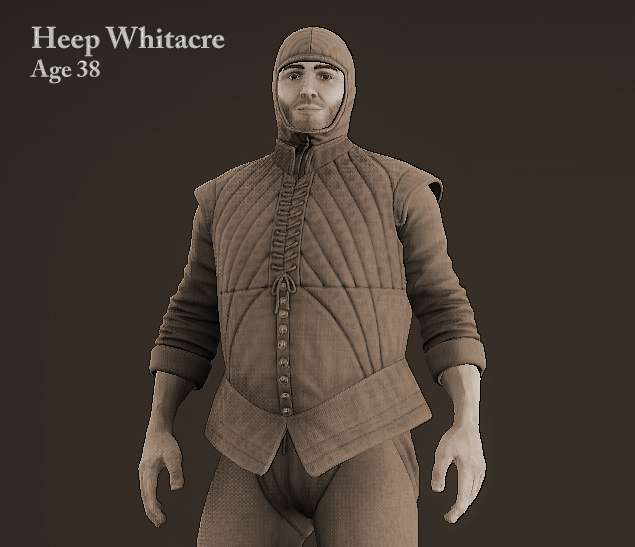 Mr. Whitacre was surprised and worried, wondering what would he do now that his crop was no longer valuable. He decided to grow some carrots and radishes, just like before, though still growing some tomatoes for himself. That's when things got even worse, his others crops wouldn't grow, only the tomatoes would thrive. Even after a couple of years had passed, not a single crop would grow other than the tomatoes, no matter what he tried. His fortune had dwindled, and he had gradually lost nearly everything but the farm itself. Though he hated how they tasted, Heep ate only tomatoes to save money. Tomato soup, roasted tomatoes, and sometimes just raw tomatoes by themselves. He used the last of his money to buy himself a vivid red & green outfit, complete with a padded doublet fit for a noblemen, so he could at least imagine what the good life would have been like. Frustrated about the status of his patch, Heep took one of his tomatoes and threw it against his house in anger.

Poverty-stricken and sick of eating tomatoes, Heep rode into town at night with a cart full of rotting tomatoes that he couldn't sell or eat. He went up to Pratie Wheech's general store, a tomato in each hand, and painted the front of his shop red. He even tossed some through the open window, hearing some shattering glass at some point. He couldn't help but laugh at himself while vandalizing the man's store, screaming "DODGE THIS YOU BASTARD", resenting the man for selling him the seemingly cursed seeds that would ruin his life. For a moment he stood there in his red & green outfit, a strange smile on his face, overwhelmed with the feeling of catharsis, then ran off before anyone could catch him. He visited the store again in the morning, curious to see what kind of reaction the townspeople would have. 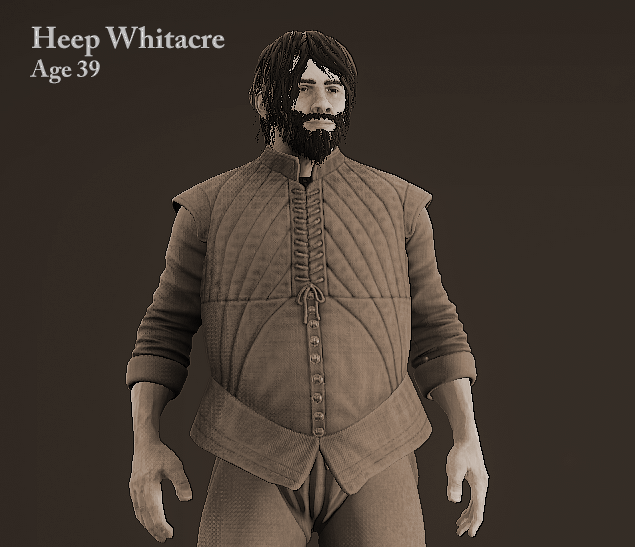 The town was gathered, a mixture of shocked reactions and sorrowful weeping could be heard. The general store was burnt to the ground, leaving only a crumbled pile of burnt wood and ash surrounded by a charred frame that barely stood. Mr. Wheech was on his knees, hands covering his face, his wife and kids crying next to him. Heep thought back to last night, how the sound of glass breaking inside might have been a lantern. His act of vandalism had inadvertently become one of arson. What was meant to be a cruel prank ended up completely destroying this man's livelihood, yet somehow felt almost no remorse. Instead, Heep surged with an intense feeling of excitement and power at the thought of taking revenge so easily. He thought about the other farmers who’d ruin his business by making tomatoes worthless, and began planning.

Over the next few weeks Mr. Whitacre had created makeshift fire-bombs out of ingredients he had on his farm. He barely slept, didn’t bathe or even take off his outfit. Eating only tomatoes to keep himself satiated, Heep kept working tirelessly to create these weapons of vengeance. Finally, he rode in the night to a nearby rival farmstead, tightly gripping two clay pots in his hand filled with the vicious flammable substance that would soon lay waste to his victim’s land. Without hesitation he cast the fire-bombs outward and fled from the scene, hearing the sounds of roaring flames and his victim’s screams from behind. One after the other, Heep burned down every last farm near Cape Itherhew until there was only one left: his own. When he realized that people would become suspicious if he was the only farm left, he planned on destroying even his own farm later that night, but it was too late. 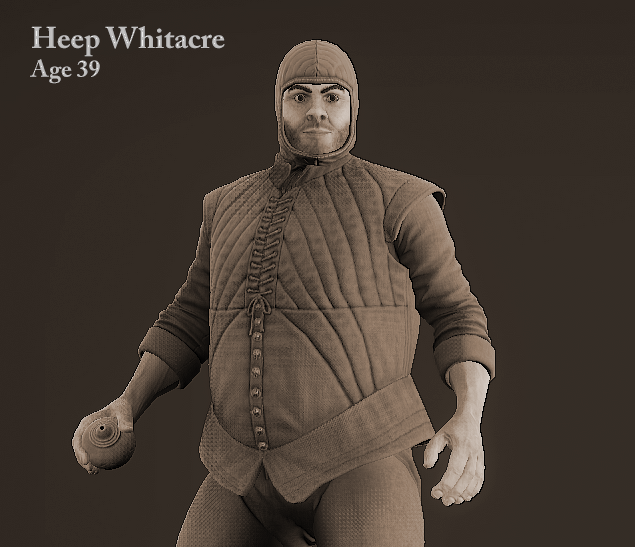 The baron Archie Thweep had shown up with a mob of townspeople, as enough people had reported seeing a strange man dressed up like a tomato as the possible culprit for the recent string of serial arsons, and arrested Heep to be investigated for his crimes. They found enough evidence of his makeshift bombs to prove he was the culprit, and sentenced him to be executed for his unspeakable crimes. When asked if he had any final words before death, all he managed to mutter in a weak voice was one simple question: “where patchie?” To this very day, people still don’t entirely understand what he meant by that, though they do find it strange that all of the proper nouns in this short story are anagrams of it.

The people of this town were so horrified of the event, that they decided to never eat tomatoes again, banning farmers from growing them out of fear that eating too many tomatoes causes you to become stark-raving mad. The tale of the town's irrational tomato fear, and the story of their tomato man serial arsonist, soon spread to other kingdoms. The legacy of Heep Whitacre was not soon forgotten. Peasants and farmers who've heard the story often interpret it as a tale of poor men uprising against the rich noble barons, referring to it as the "tomato uprising". Overworked, underpaid men will don the tomato suit and join together as rebels to fight for fairness: equal treatment for all. Nevertheless, anyone caught wearing such a ridiculous outfit is often killed on sight as ordered by the high court, to thwart their rebellious efforts. 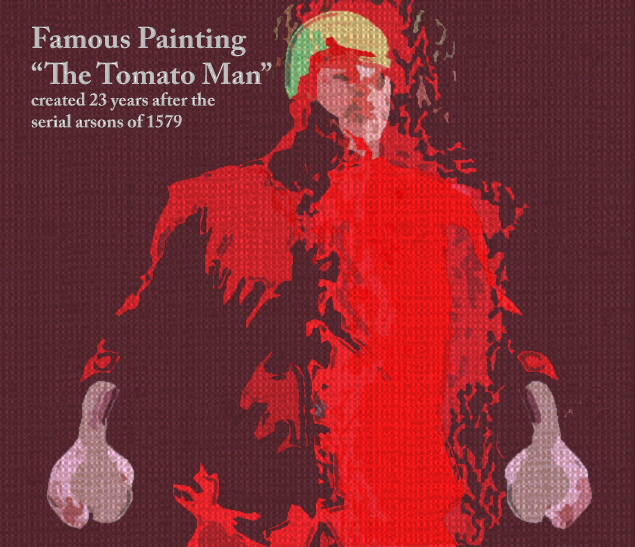